Just a quickie here: I want a couple of little single-seat vehicles to go with my big Classic Space crawler. I’m thinking a ground vehicle and an air vehicle—maybe even a water vehicle—that are basically built around the same plan. The space exploration equivalent of a motorbike or jetski. I’m not entirely sure about size yet, but I know what I want to use for the windscreens, so here are a few preliminary sketches of ideas. 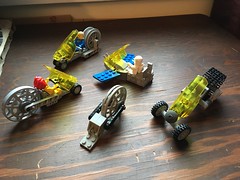 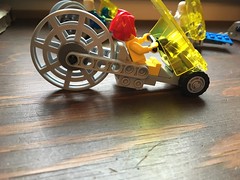 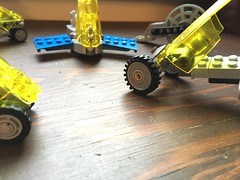 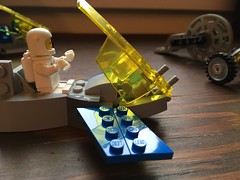 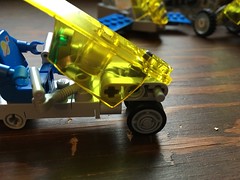 As you can see, I’m trying out ways to attach the rest of the vehicle to that Bionicle piece that is the windscreen. So far, I’m liking some of the connections and some of the bits of the vehicles, but they’re all much larger than I think I want. I think I’m going for something much closer to motorcycle- or jetski-sized—that is, not much larger than the rider/driver. Maybe that windscreen is just a bit too big for that to work. We’ll see.

For entirely too long now, I’ve been working on a big Lego project—school and other things keep getting in the way. For me, Lego creation is an iterative process: have an inspiration, build it, look at the result, make it better. Sometimes “make it better” involves entirely too much disassembly—it seems like the part I need to change is almost inevitably deep in the heart of the structure. Since the whole project isn’t done, I thought I’d share a piece of it that is almost done. 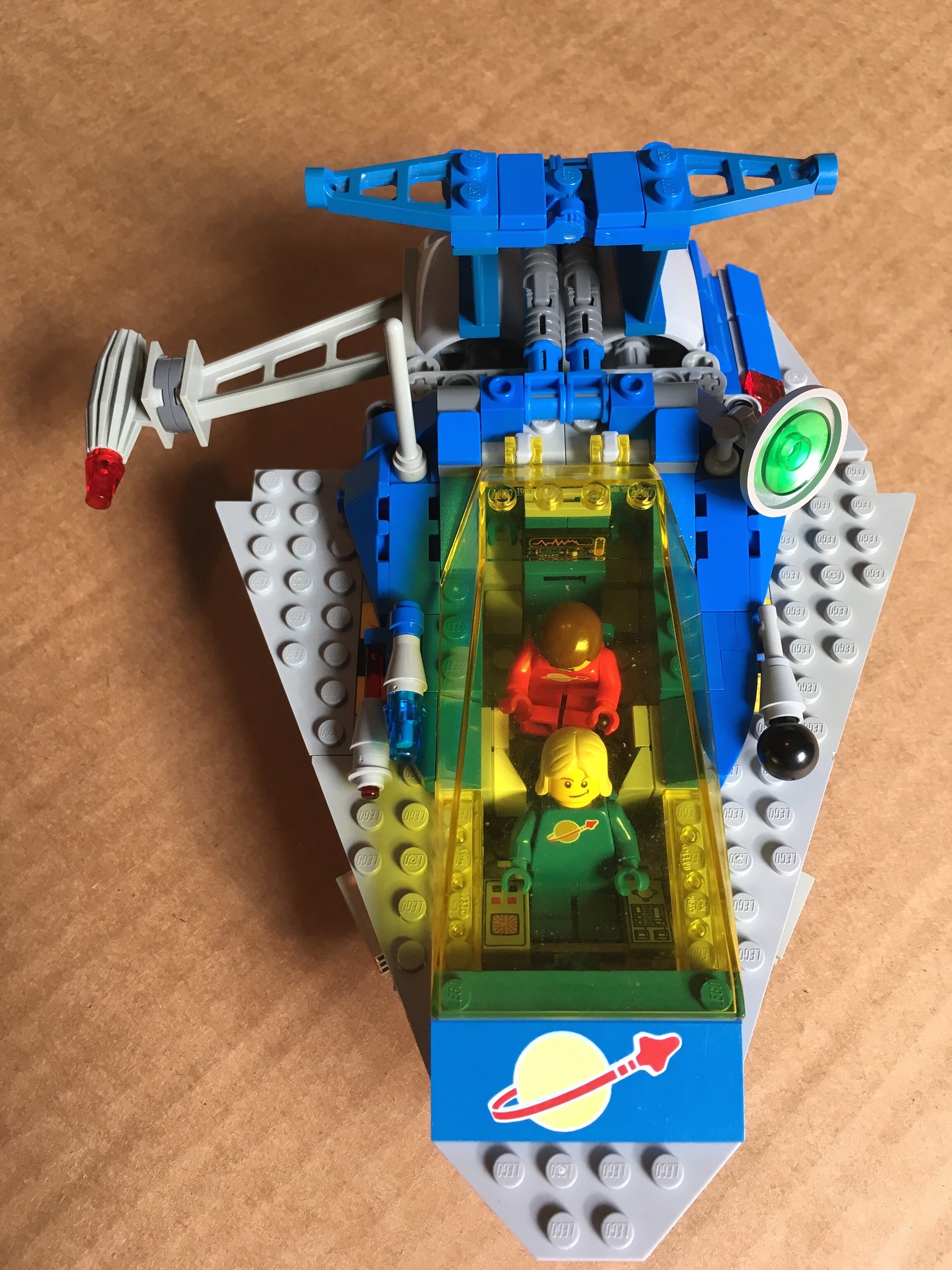 This little ship is still a work in progress, about 90% of the way through the iterative process, so it’s a good example of how things happen. The gross asymmetries are experiments—both sides will match once I’m done. (The small asymmetries are intentional.) It started out with the following parameters/inspirations:

For the longest time, what stymied me was the rear engines. I knew what I wanted them to do, but couldn’t come up with linkages that would move them in the way I wanted without bulk where I didn’t want it. Finally, I settled on a basic parallelogram linkage, and just accepted that the anchor points would have to be towards the outside, rather than the center, of the ship. Once I’d settled on that, the rest came together very quickly—just a couple afternoons to work through several minor variations.

The basic design cues are meant to echo the original 3 Classic Space ships: 497, 487, and 918. In particular, my goal was something smaller than the Space Cruiser, but not quite so small as set 918. With that huge canopy, I figured it should sit 2 or even 3.

Other than the engine mechanism, the biggest challenge was the body shaping. I started out with an even narrower version of the classic delta-wing design, using the 12×3 wings, but that didn’t really give me the look I wanted (and never made it far enough for even a WIP picture). Going with the classic 8×4 wing was perfect, except that I had to do something else for the nose. As is usual in my experience, it’s all about choosing the compromises you want. I’d’ve preferred to use the classic 4×4 wings for the nose so there wouldn’t be a notch in the transition, but that would’ve made the ship either longer or wider or both—or required I not use the Classic Space-logoed slope at the front.

Anyway, without going into too much detail on part choices, the fundamental problem I often run into is the tension between something “clever” and something that better fits my vision for the end result. I want to push myself, and to show off—but I also want something that I like the look and function of. For example, the back end of this is currently multiple options at once, as I try out every idea to see which one I like. 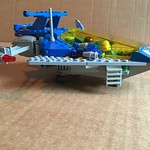 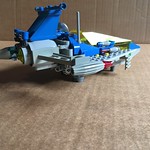 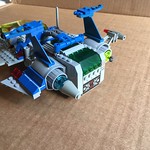 In the end, while I’m really proud of figuring out the geometry that makes the little winglet float with the engine while still lining up with the general wingline, I think it makes it look too much like a Star Wars A-wing when collapsed, rather than a Lego Classic Space ship. But I’ll take feedback and suggestions on what it should look like. (Click on any image to go to my Flickr gallery for more pics. I tend to over-document because this is also my personal record so that I can remember or even reconstruct something in the future.)

Other than that, I’m happy with having lived up to my goals pretty well, I think. And it lands reasonably on the intended landing platform, though not with much room to spare. 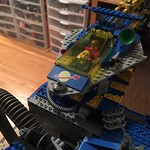 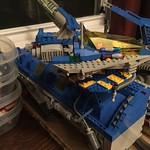 I’ve strayed. I thought I had learned my lesson in grade school when I picked up a cool Tente space truck. Or maybe in middle school when I got some Tyco Super Blocks as a present. I certainly “knew” that the clone bricks just aren’t worth it—sure, you might get some cool shapes you can’t find in Lego, but at what cost?

I’d keep seeing these Mega Bloks Halo sets, with their many different curves and gorgeous shimmery purples. And there was that big puzzle-piece dome. Of course I knew I shouldn’t. But Nnenn did. And then I saw this Silent Running-esque ship using the Mega Bloks domes. And Jang (of Jangbricks) started buying and reviewing Mega Bloks sets. And I started looking a little too closely when I was in the store. I’d pick a box up, turn it over and check out its pieces. Look at the little window where you could see some actual pieces shimmering.

And then one day I thought “well, it can’t hurt to look”, and checked a price.

END_OF_DOCUMENT_TOKEN_TO_BE_REPLACED

Just a quickie, here. Caitlin wanted to use my Legos for a knitting project, and needed some guidance on what colors existed and what to call them in order to buy more. So I put together a plate with examples of most of the colors I have. She suggested that I take a photo for reference, which is an excellent idea, because I sometimes have to do some digging and comparing to figure out the more obscure colors myself.

So, here it is. It’s mostly for me to reference in the future, but I thought I’d share in case anyone else would find it useful. END_OF_DOCUMENT_TOKEN_TO_BE_REPLACED

I don’t usually participate in any of the Lego group builds/theme builds for a number of reasons. A lot of them don’t call to me, and the ones that do tend to be the more involved ones, and I just don’t have the time. But this year Nnovvember rolled around, and an idea struck me: I’d been wanting to do something in the style of the Galaxy Squad bug ships but hadn’t figured out what. I was thinking a beetle, but that doesn’t fit the requirements of a Vic Viper—then it hit me: stag beetle! It has the two forward spars. And I can use the wings and shell for the Vic Viper’s requisite structures!

END_OF_DOCUMENT_TOKEN_TO_BE_REPLACED

About a month ago, I had just disassembled the first line of Galaxy Squad sets and wanted to force myself to build something from just their parts–the constraint helps me work on my creativity. I haven’t been happy with the polish or problem-solving of my building of late, which is probably due to not much building in the last 5+ years, and not a whole lot more than that in the previous decade.

Anyway, I was trying to decide what to do, and that’s when Mobile Frame Zero arrived. Perfect synergy! So, I set out to build a Galaxy Squad-themed Mechaton (er, sorry, MF0) squad. It was a fun exercise, with mixed results.

END_OF_DOCUMENT_TOKEN_TO_BE_REPLACED

A couple months ago, I rediscovered some of the updated versions of classic Space Lego sets, and got to wondering about Blacktron, absolutely my favorite Lego theme as a kid. I did some digging around and found that a lot of people had done updates for Blacktron II sets, there were a couple different runs at “Blacktron III”, and a fair number of people doing new ships in the colors of Blacktron. But mostly people were focusing on the Blacktron II theme, using either its colors or cockpit style, and while I love those cockpits, I’ve never cared for the color scheme or actual sets in that line.

END_OF_DOCUMENT_TOKEN_TO_BE_REPLACED

Well, as usual, I lost when we played Mechaton. In fact, this time around, I didn’t just not-win–I was the first to be eliminated, and was the only one to end the game without a single mech still standing, and not even my own station still on my side.

END_OF_DOCUMENT_TOKEN_TO_BE_REPLACED

Saw this via The Brothers Brick, and just had to share:

Sensible bike advocacy and Legos, all in one. And it’s cute.

This spring, I placed an order from the Lego Shop online. Somehow, set #8259 ($10/165pcs) got turned into #8295 ($90/1182pcs). And clearly the error was at the fulfillment stage, because the invoice included in my package listed the correct set, and I was charged the correct amount. For a moment, I thought of considering the larger set it a loyal-customer reward. But I knew that I couldn’t have them making mistakes of that magnitude on a regular basis, so I had to let them know, in case it reflected a systemic problem.
END_OF_DOCUMENT_TOKEN_TO_BE_REPLACED

Mental Propinquity
Create a free website or blog at WordPress.com.